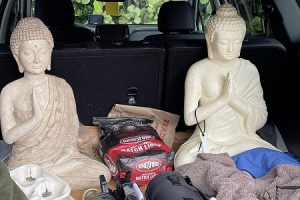 This is one of the most unusual encounters that I’ve ever had with the mineral kingdom, and it has yielded an uncommon insight. None of my crystals was stepping forward to say: “It’s my turn!” and I got quite confused by the situation. Finally, I just asked: “How come no one is stepping forward this month?” and I heard all my crystals say in unison: “Because you’re talking to all of us!”

“That’s what we mean … all of us. You’re speaking to all of us at once as a collective entity.”

“I don’t know what that means?” I said, because I was getting quite perplexed.

“You must ask the Buddhas,” sang the choir of crystal voices.

We are very keen gardeners and we like to decorate our yard with statuary, but we’ve found that white is the best color for us – because it stands out best. We also particularly like Buddha statuary, but we find it hard to find white Buddhas.

Every year we take a winter vacation on Sanibel Island in Florida and to our delight, we discovered that they actually sell white Buddha statuary at the garden center in Sanibel. This year, they had added to their inventory and we were able to get not one, but two Buddhas. This was right at the beginning of our trip, and then without even discussing it, we just sort of agreed to keep the statues in the car, because that’s what seemed to make sense … so there we were on Sanibel Island driving around with two nice-sized Buddhas in our car … and it seemed like quite a good idea at the time.

What we didn’t factor into our thinking, was how these two Buddhas in our car were going to affect us – why would we? Without prior experience, there was no reason to think of this as anything other than an expedient decision – we wouldn’t carry them into our little cottage only to carry them back out again. I certainly didn’t expect the profound alteration in my thinking that turned out to be the consequence.

I can’t really say what happened next, because I wasn’t aware of the underlying current that was set into motion. What I can report, is that after about 8 days of driving around with these Buddhas in the car, a deep-seated attitude changed, and it was a very, very specific attitude too.

I’m just being honest when I say that generally, I’m a kind and compassionate person, but if you hurt me badly enough, I will cut ties and be done. Apparently, this is because I’m a Leo. Whatever the reason, it’s the way I’ve always been and I’ve just accepted it as “I’m made that way.” There are reasons – there are always “reasons” but I’ve learned that reasons aren’t important. It’s the consequences that are important and the result is that I have a painfully long list of disappointing friendships that ended with me feeling abandoned and angry.

During the pandemic, I’ve been thankful for social media and the opportunity to interact with people virtually. Many old acquaintances have been revived … including, unfortunately for me, these former connections. That put me in touch with how fiery my feelings of hurt and abandonment still are. I felt like a victim again.

There I was, wrestling with these miserable feelings, when suddenly a voice in my head said: “Why be a victim? Just forgive them. Then you’re free.”

“Just forgive them? Who said that?” I wondered.

“We did,” said the voice in my head and I turned my head ever so slightly, and saw the Buddhas, sitting calmly behind me, like statues, serene as ever …

So, in that moment I just let go – that’s all it was – a letting go in the name of forgiveness. Just like that! Something had already happened inside me … a shift. I just had to be aware of it. I felt a great heaviness lifting off me, and I felt my heart expand, and I was liberated. What an exhilarating feeling!

“Now, what the heck does this have to do with messages from minerals?” I asked, and this is what the minerals told me:

“We have Buddha consciousness. All minerals are compatible. We do not compete with each other like the plant kingdom, and we do not eat each other, like the animal kingdom. We form naturally from the available resources, and we live in community. We live in peace and harmony with each other, we are compassionate and we are a source of love. We are here to support you.”

Thank you, Mineral Kingdom. We love you too!