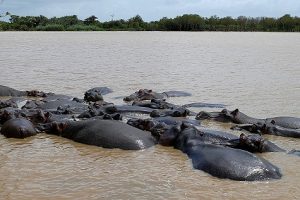 This was a Journey to the Lower World to request important and helpful information to present our Schapera Show today.

I entered the hollowed out tree trunk that I usually use and stepped into the fiery portal on the ground inside the trunk.
I went down the beam, down and down, until I saw a very green, mountainous area below.
I landed in a jungle, and almost immediately, one of my Spirit Helpers in animal form appeared (Black Panther) – he takes the form of a large black cat. I knew I was supposed to climb on his back, I lay on his back as he ran through the jungle, and I could feel his enormous strength and sense his agility as he ran.
I understood that this was a first message to me – to appreciate how enormously powerful the Spirits are – they could destroy us but they don’t – we can and should trust them.

He pretended to eat my arm to emphasize that they are benevolent.

And in this, there was another message of “are we benevolent to other people especially if we have power over them?”

He took me to a place that I have seen many times before, and I call “Hippo Lake” as it is a large lake with many hippos floating in it.
I sat down on a large rock – and then realized that it was in fact, the back of a hippo lying down out of the water.

And there was a message in this too: “the Spirits are right here with us, but most of the time we don’t notice them”.

In ordinary reality, hippos are actually some of the most dangerous animals – killing more people a year in Africa than any other animal.

So here was another message showing us that these enormously Powerful Spirits are also very gentle and its safe to interact with them.

Then a whole lot of information came to me – and I wondered who was delivering it. Immediately I saw an Owl- not a Spirit I had previously met in the Lower World.

I understood though that the Owl was being shown to me just to satisfy my unnecessary need to know who was delivering the information, and an owl is of course an archetypal image of wisdom, so I was also being informed that the information I was getting was from a trustworthy and wise source.

The Spirits said that the state of the world, especially regarding the problems like war, pollution, environmental damage etc, is a reflection of the state of human consciousness.

The Spirits said, we are all so tense and anxious, and this is what we should be working on with determination – to reduce our individual tension and anxiety.
Its as essential and important as eating – everyday, a number of times a day, we should be working to improve our consciousness, and put simply, so that the average human can understand what this means, it is to reduce our tension and anxiety.

We are tense in everything we do – all our interactions and actions.

We can start changing our consciousness by reducing our physical tension regularly throughout the day – relaxing our muscles and our breathing.
There are some skills we can learn which are very helpful in this regard – like the Alexander Technique.
We should apply the knowledge we already have to help ourselves – I think this was directed at myself!
We should pause regularly through the day to be more relaxed, and be intentional in helping ourselves.

This is not being selfish – this is essential for the survival and well-being of humanity and the whole planet.

Through the day, we should regularly consider “how can I help myself?” – its a kindness to ourselves and the world.

They also said that just as on a previous Journey I reported on for our Show, where they advised that following the 10 Commandments is essential for humans to live in groups, in peace and cooperation, so the principles of being polite and not being rude are essential for us to live harmoniously in groups.

The Spirits said that it is very unfortunate (and undesirable) that the media frequently promotes such a huge lack of politeness, and so much rudeness and aggression.

They said that being a parent is a huge responsibility – teaching children to be ethical, moral, kind, polite, not rude, not aggressive.
There was an implication in this guidance that many parents are not able to do this. People could consider “are they actually “fit” enough to raise children?”

A helpful practice would be for small groups of people – maybe they work together or are friends, to have regular gatherings where they sit together and practice relaxing their tension and anxiety while they talk and interact, and practice being polite and kind, and not rude and aggressive.

The Spirits referred to the rampant “consumerism” of our societies and to understand that for most of us, everything we buy is a replacement for something we already have, and we should appreciate the staggering volume of “stuff” that goes to waste dumps and land fills every day. This is a huge stress on the ecology of our planet.
They said we should picture how much is purchased every day in all the stores, and how virtually an equivalent amount of stuff is sent to the garbage dumps every day.

The “consumer” mentality is very problematic.

The Spirits also said that there is an inherent problem with our modern technology – it is constantly “improving”, so we constantly want to replace what we already have to get the “better” version eg. of TV’s, computers.

And also, there is the problem that many manufacturers are guilty of, where they produce items with built in obsolescence, that have to be replaced because they break down so quickly. This must change – eg. a toaster should last for decades.
I just experienced this recently where our 4 year old TV stopped working and costs $430 to repair. The TV repairman said that we shouldn’t expect TVs to last more than two to three years.

But the main thing that needs to change is our consciousness – our state of mind. If we approach this with the seemingly simple intention of being less tense, our consciousness will change, and our world will reflect this, and change for the better.

This is the guidance from the Spirit Realm

The drums call me back.